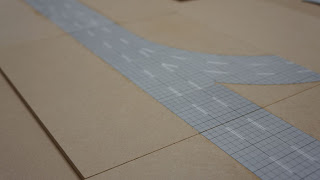 Continuing on with my Mad Max themed Car Wars Project, I made a start on the terrain, after much deliberation I decided to make a mixture of both paper terrain and actual modeling terrain, traditionally, Car Wars is played on grided paper that was originally supplied within a boxed set or as part of an expansion set that you could buy in addition to a boxed set, this is how I remember Car Wars and for me this holds a certain romance, so I wanted to incorporate it into this project but also wanted to give it a modern vibe, I dont know If it will work the way I want it too, but I am willing to give it a go, fingers crossed. 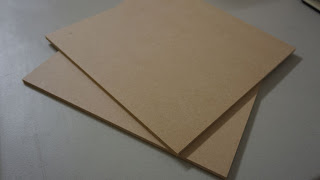 ﻿
So, the way I thought that it would work best was that I would set it up in a modular tile fashion, as they progress up the highway you take the last tile and flip it to the front kinda like 'leap frogin' this would go on until the scenario was resolved, being happy with the mechanics of it, I went to a hardware store and purchased eight 300 x 300mm MDF tiles, 6mm thick to keep away any bowing or flexing, this next bit was fairly easy, I centered the paper roads then glued them down flat, using wood glue, pretty simple but I think it looks effective so far, the next part is going to be the fun part, detailing the terrain, I will report back when I have done some more, thats all for now. 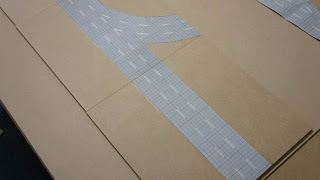 ﻿
Posted by The Extraordinarii at 3:09 AM

Good idea. By the way... Ramshackle games makes some awesome bikes you could use in this setting!

An excellent looking piece of road.

See where you're going with this. As Meatloaf would say, 'Objects in the rearview mirror look closer then they are.'

@LordSiwoc - No minis in this one, I'm printing my own counters.

It all looks good so far,I'm a great advocate of "rolling terrain".

Thanks Guys, hopefully it will turn out OK.

The Extraordinarii
Melbourne, Victoria, Australia
Historical and Gaming enthusiast, Favorite Gaming periods include Ancients - Gladiator and Chariot Racing games, The Dark Ages, Japanese Fuedal period, Wild West, American Indian plains War, on a more mordern based time frame it would be the Vietnam War, Iraq and Afgan wars and future based gaming includes Zombies and Post Apoc Car wars, Hopefully I will game all these periods.